The 11 players attending were split into 2 teams. The individual performances saw Denis Anderson edge out his mate Jim Edwards, who had been lying second in the first game, with a 104 in the second game and take 3rd place overall with 201. Brian Stephens, well rested from his holidays, came second with an aggregate of 210. Although Marie Davies’s 109 was the highest score of the second games, Roy Jones managed to hang on to his first game lead, scoring 121, to amass 225 in total and named the winner. With Roy, Brian and Marie being in the same team, ably supported by Sue Edwards and Chris Stone, Team 2’s overall average of 177 beat Team 1’s 154 to take the plaudits.

The next meeting will be on Sunday 27 November. This will be the last of 2022, as there will be no meeting in December with the last Sunday being Christmas Day. 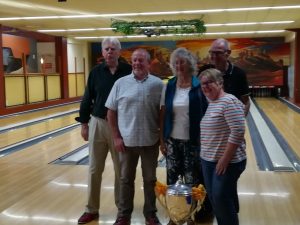