Our return to Plaza Bowl in Argeles after its closure for renovations, received a good turnout, with 18 players forming 3 teams of 6. The numbers were enhanced by 2 existing members – Brian Thompson and Denis Anderson – playing for the first time and a total of 5 guests of other members.

The team performances were topsy-turvy, with Team 3 being winners of the first game, boosted by David Shears 127, and Team 1 the losers, exchanging places in the second game. But the winning team overall was Team 2, with second game contributions from Jim Edwards with 131 and a very impressive 171 from Brian Stephens, who was this month’s outright winner with an aggregate of 235. In second place was David Shears with 224 and yours truly in third place with 212.

The photos show Brian being presented with our glorious cup – again, and the winning team of Kate French (guest), who seemed to be trying to develop a style of bowling backwards, Jim Edwards, Brian Stephens, John Nettleton, newcomer Brian Thompson and Joanne Harding (guest). Congratulations to all. 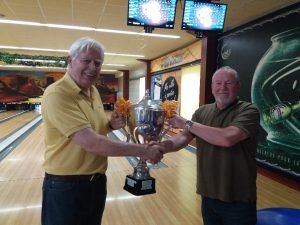 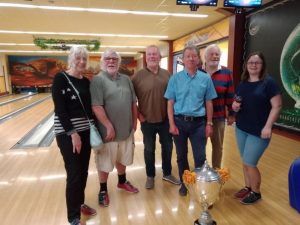 We next meet at Plaza Bowl, Argeles, on Sunday 29 May.