We returned to Xtreme Bowling, Perpignan, for the March event, while Plaza in Argeles is being renovated. On the day we were reduced to 2 teams of 3 each, but loaded with a number of previous cup winners, most of whom scored well in the first game. Surprisingly though, the second game saw a drop in level, with only the stragglers in each team improving, until “9-pin” Brian Stephens managed to string a row of strikes together to post the highest score of the day of 143. Together with his 126 in the first game, his aggregate of 269 was the clear individual winner, followed in second by Marie Davis with 226 and David Shears in third with 222. The team of Brian, Marie and myself were the winning team scoring 679 in total, against 584 for the runners-up. Congratulation to all, seen here at the presentation. 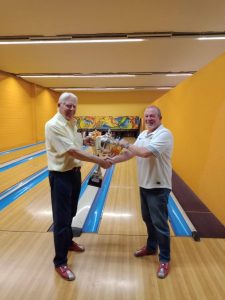 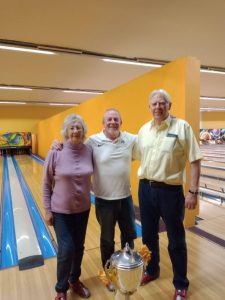 Next month, we are back “home” at the Plaza Bowl in Argeles on 24 April, and hope to see the return of many of our past players.